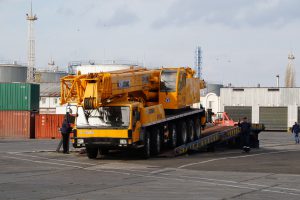 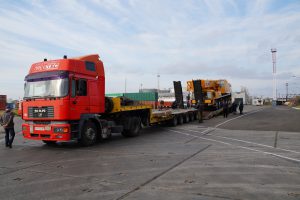 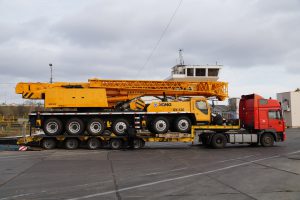 In the end of 2015 MeerLand Ukraine has arranged delivery of truck crane which has the maximum crane handling radius comparing to the rest of truck cranes in Ukraine – 60 m.

During delivery we faced a problem as according to agreed terms it would be self-moving to trainer, but in fact due to wheels angle it could not moved to trailer. Anyway, with some construction engineering solutions, all was successfully set. But it was not the end.

Oversized dimensions, schedule of routing via bridges (with full traffic suspension and routing was as Odessa – Dnepropetrovsk – Zaporizhzhya), adverse weather conditions on the way, tight deadlines added certain troubles.
But under Meerland’s team close careful control on every step all things were successfully set and unit delivered to Final Destination.

As you may know, an intensive process of elimination of the USSR communist heritage has been taking place recently in accordance with decommunisation act adopted by Ukrainian parliament last year (in 2015).
The most remarkable illustration is renaming of cities, streets, etc. and demolition of memorials.

This highest monument in Ukraine was installed in Zaporizhzhya near the famous Zaporizhzhya Hydro-power plant. It was 19,8 meters height thus taking the 11-th place in monuments to Lenin global world’s rating (exceeding 14000 monuments).

We were really surprised that the highest monument to Lenin (Communist leader of USSR) in Ukraine has been dismantled by truck crane which our company had delivered.

Thank our team for organizing delivery process during early winter weather conditions in Ukraine, successfully setting of all operation and engineering issues.